The interpretation and understanding of the model is both important and difficult. In this post we demistify the summary and plot of the simple linear model. Think about them as a concentrated useful information which tells the story about your data.

First you obtain the equation for your regression \(y = a+b*x\). Since we have assumed a linear relationship between the response and the predictor(s), the entire ﬁtting problem reduces to estimating the best coefficients (parameters) \(a\) (intersept) and \(b\) (slope). This coeffitients provide the best solution for our model, meaning minimized the sum of squared error. So the queation takes the form: \(mpg = 30.1 - 0.068*hp\).

Intercept is the mean (expected) value of \(y\) (\(mpg\)) when \(x\) (\(hp\)) $ = 0$. It’s needed to constact the line , but it often does not make much sense, since no miles can be driven if a car has 0 horse power. So, don’t bother with a meaning of the intercept now. In the posts on centralisation and normalisation of the variables, the intercepts will starts to tell you something useful.

\(b\) is the slope (rate of change) — the average increase in \(y\) associated with a one-unit increase in \(x\). It shows what kind of correlation, positive or negative do we have. The higher is coefficient \(b\), the stronger the predictor (hp) influences our response variable (mpg).

Standatd error can be used to compute confidence intervals. But it’s easily done with R:

t-value from t-test shows weather the slope is different from 0. t_value = Estimate / Std.Error. t-statistic measures the number of standard deviations that \(b\) is away from 0.

p-value shows the level of significance of our correlation. Roughly speaking, we interpret the p-value as follows: a small p-value indicates that it is unlikely to observe such a substantial association between the predictor and the response due to chance, in the absence of any real association between the predictor and the response. Hence, if we see a small p-value, then we can infer that there is an relashioship between the predictor and the response. Stars are helping to quickly see whether this relationship is significant or not. Thus, we reject the null hypothesis, which assumed no relationship between \(x\) and \(y\). Typical p-value cutoﬀs for rejecting the null hypothesis are 5 or 1 %. When n = 30, these correspond to t-statistics of around 2 and 2.75, respectively. Conclusion: the lower p-value, the better.

\(R^2\) = 0.6024 means that ca. 60% of the variance in our response variable can be explained by our model. Normally, for physics or ingeneering, it’s not that much, because 40% of the variance are due to the factors which are not yet included into the model. But for some areas of science such as biology this might be a good model. Being a proportion of variance explained, \(R^2\), can only be between 0 and 1, and is independent of the scale of \(y\). Important to know, that \(R^2\) also shows how good are predicted values fit the real values. Conclusion: \(R^2\) is a very good indicator of model efficiency, the higher is \(R^2\), the better our model describes the relationship between two variables (except of the problem of overfitting which is outside of the scope of this article).

Roughly speaking, it is the average amount that the response \(y\) will deviate from the true regression line. The RSE is considered a measure of the lack of ﬁt of the model to the data. Conclusion: small error - good fit, large error - bad feed. But how do we know, whether our number - 3.86 is small or big. Well, we can calculate the predicted error rate by dividing RSE by the mean of the outcome (mpg): \(3.86/mean(mpg) = 19\)%.

F-statistics and p-value of the model

F-statistics tests the null hypothesis, that all predictors have no influence on the outcome, the coefficients (slopes) of the predictors are zero, meaning non of the predictors has a relationship with the outcome. The alternative hypothesis is that at least one predictor has a non-zero (significant) slope. When there is no relationship between the response and predictors, one would expect the F-statistic to take on a value close to 1. On the other hand, if alternative hypothesis is true, we expect F to be greater than 1. In other words, the large F-statistic suggests that at least one of the predictors must be related to the outcome. Having a lot of data (large \(N\)), an F-statistic that is just a little larger than 1 might still provide evidence against H0. In contrast, a larger F-statistic is needed to reject H0 if \(N\) is small. Thus the F-statistics alone does not show a significance, that why we need a p-value. 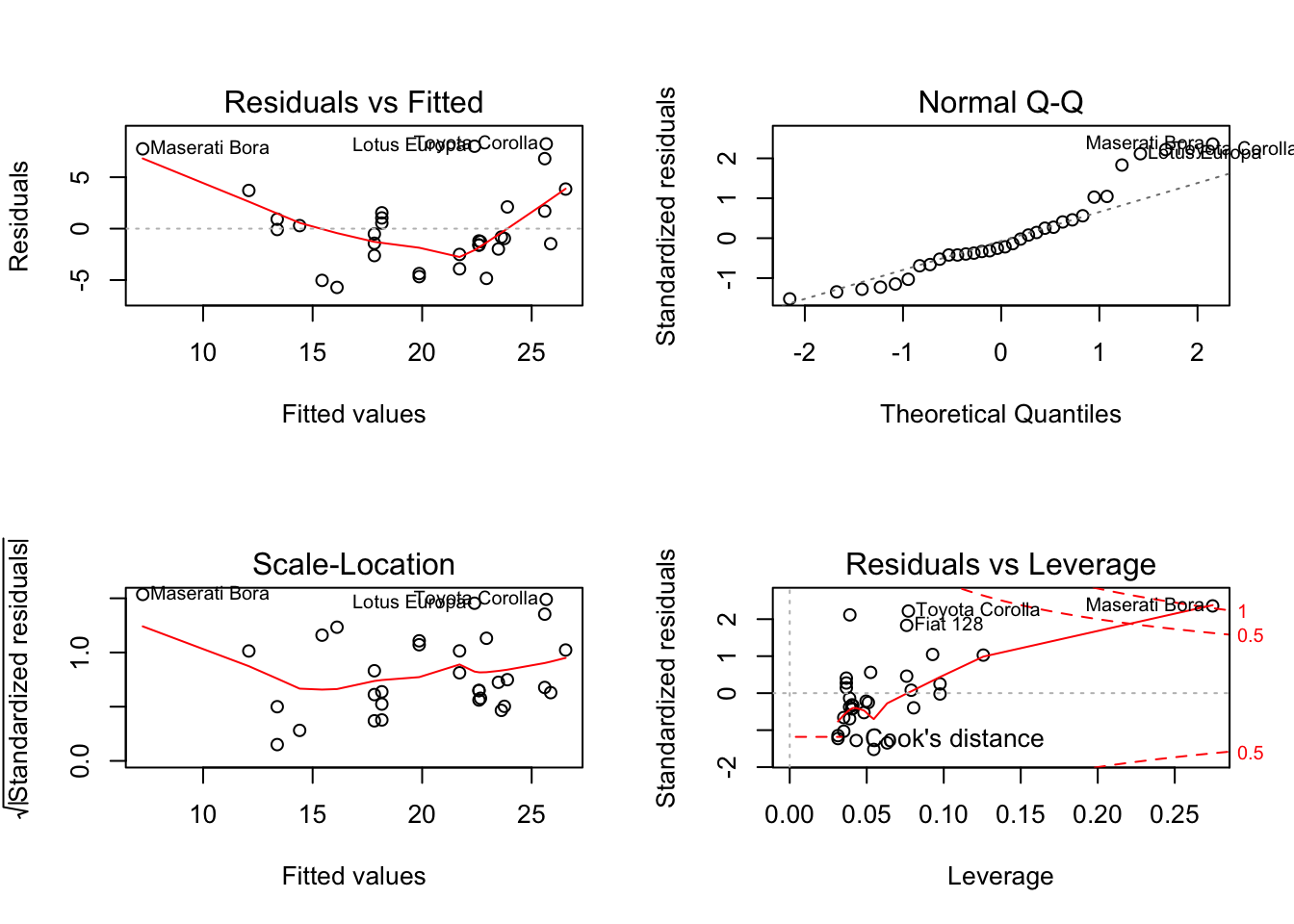 ..are almost the same. They show the distribution of the residuals (error terms) - the diﬀerence between the ith observed response value and the ith response value that is predicted by our linear model. If they show some pattern, then your model is non-linear or the model still did not catch some effect. If the model is good, the residuals supposed to be normally and evenly distributed.

Its difficult to say, how much the diviance from the middle line normal or not, that is why this plot is less useful as it should be, instead we can build histograms with normal and standardazed residuals.

Thus, if removing a point heavily influences the model (Cook’s distance >1), then is does not suppose to be in the dataset.

The forth plot is also not to helpful, when it comes to identifying outliers or high-leverage points. So, you can see, that the “classical” model diagnostic by “plot(model)” is not very helpful, nevertheless, it is often used and suppose to be understood, even if you conclude not to use this to often. At least it it now demystified. 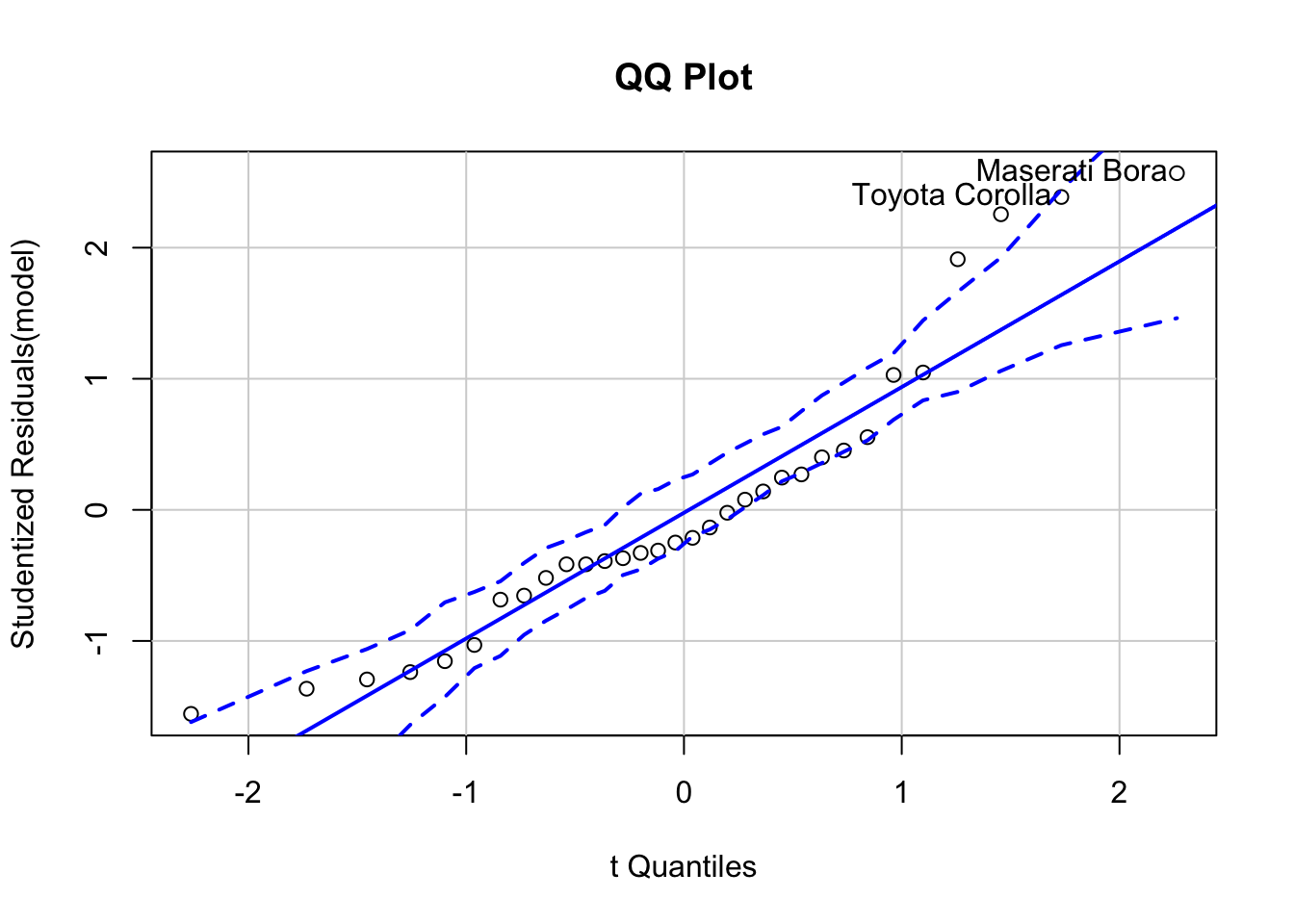 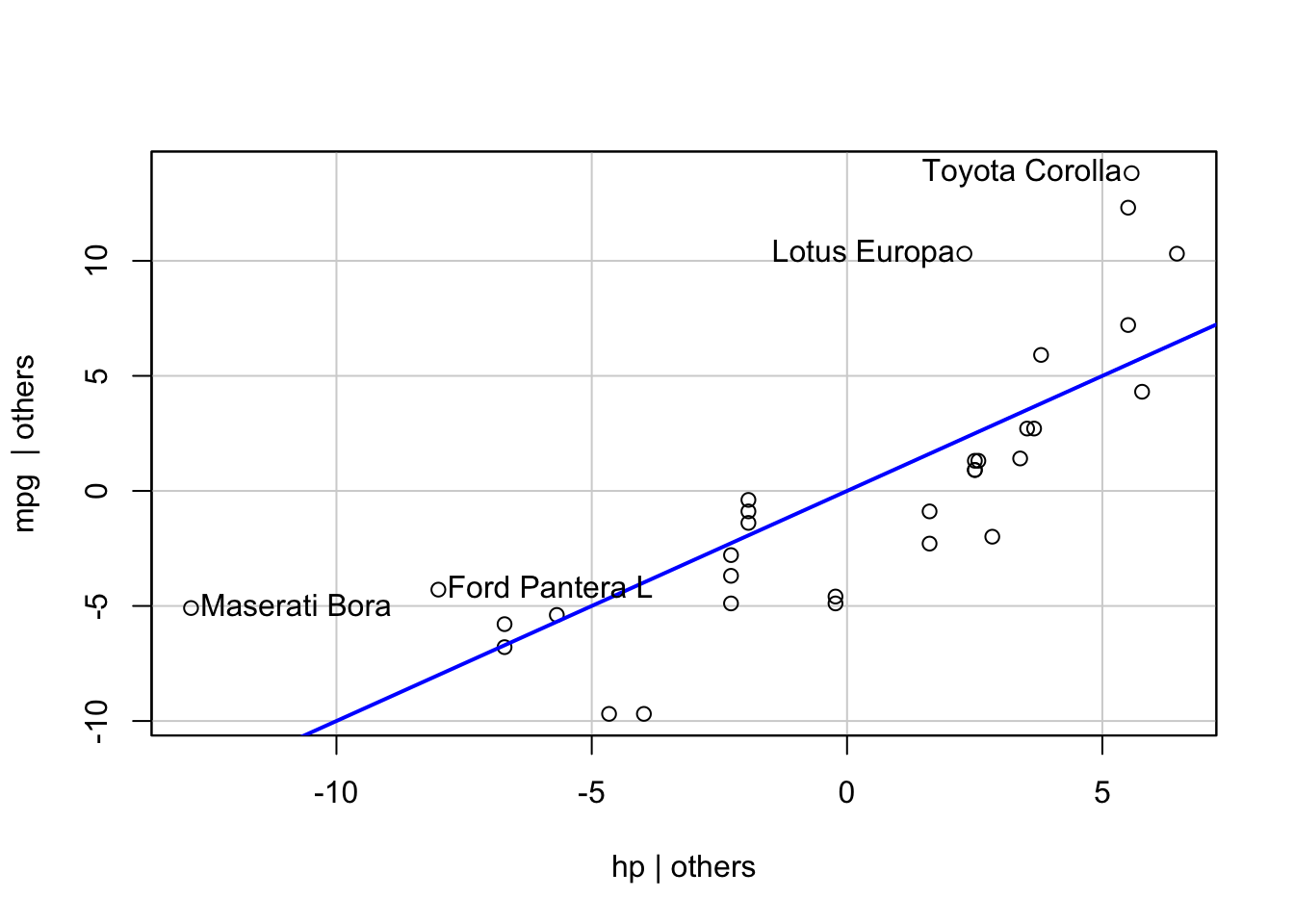 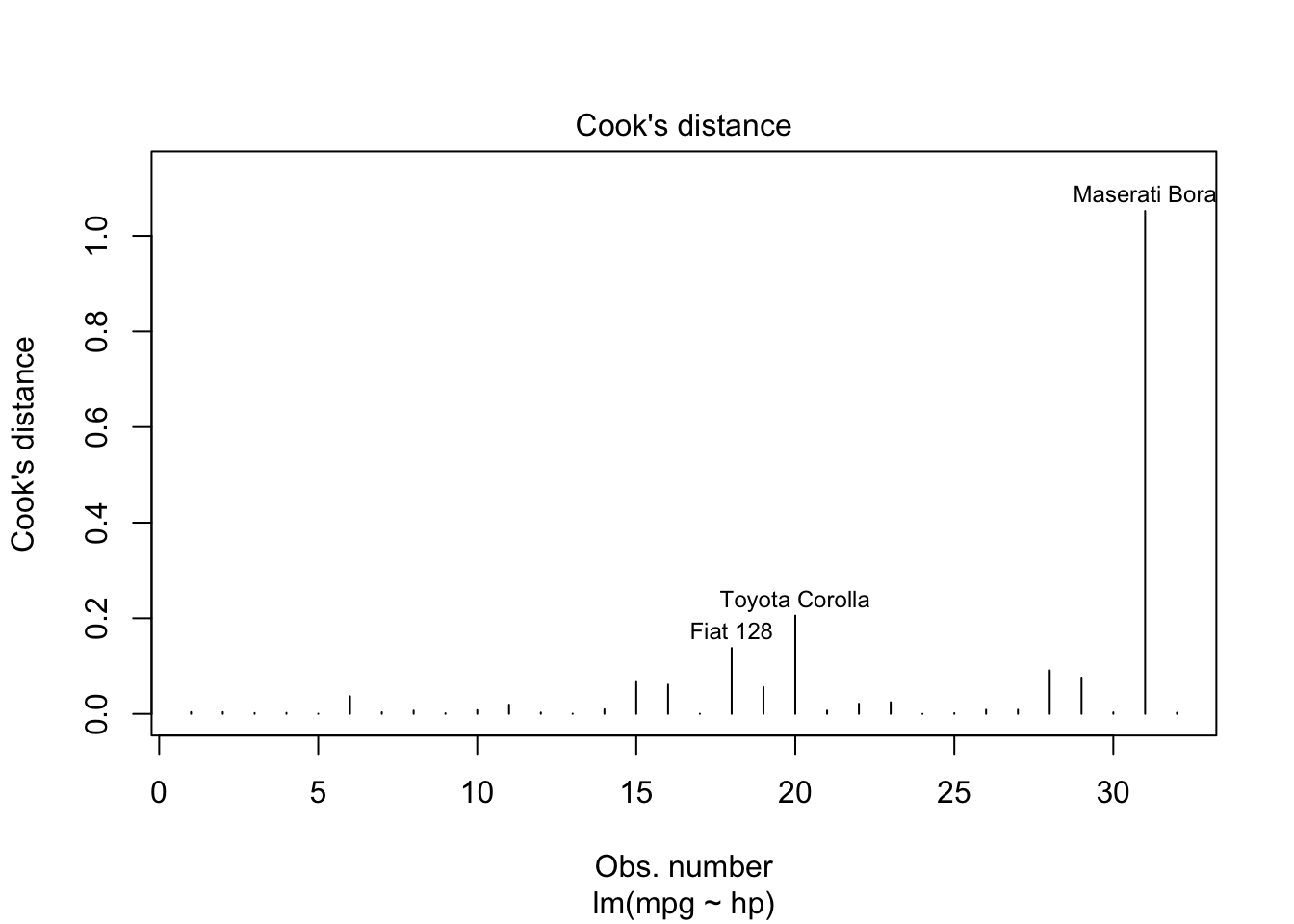 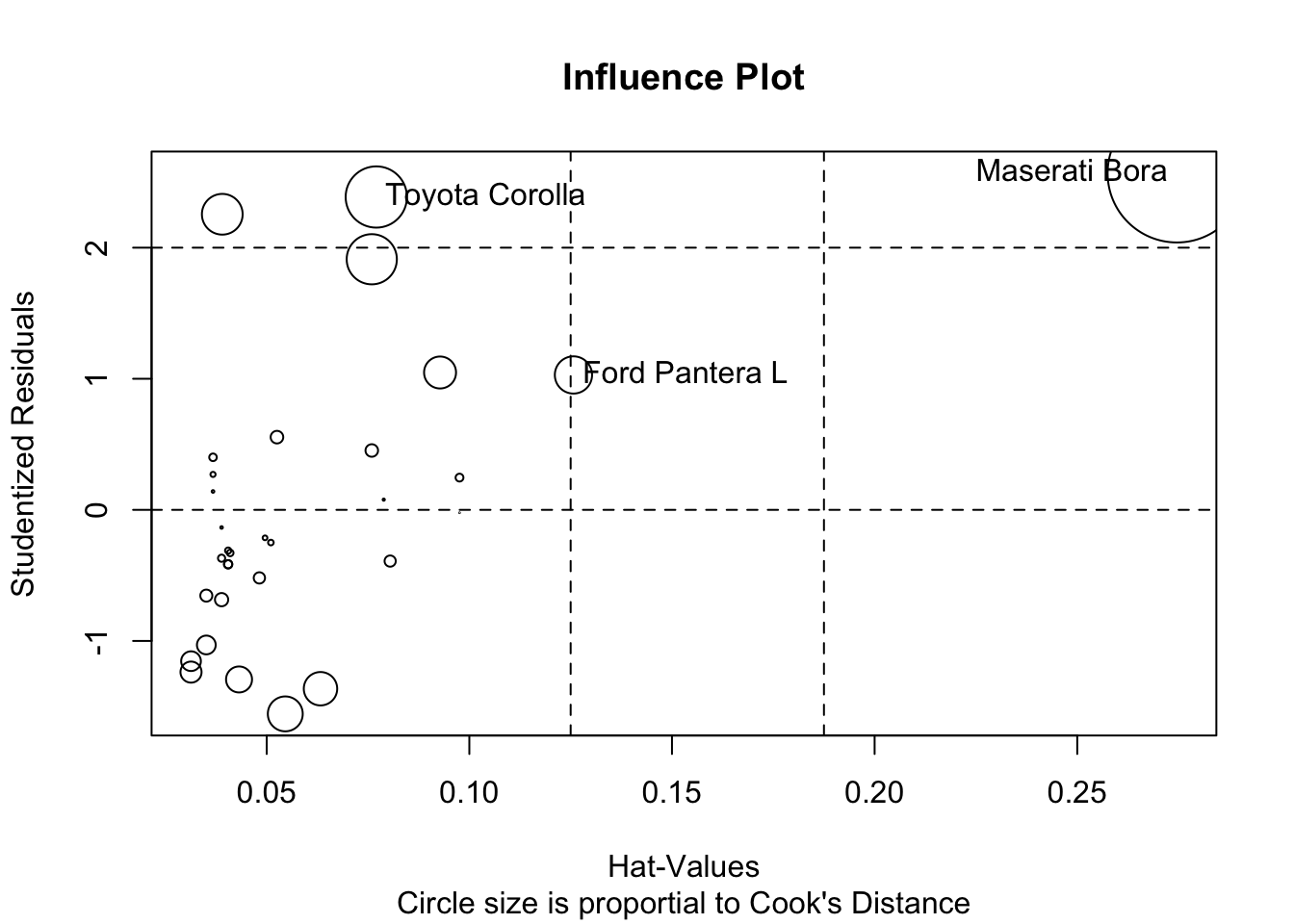 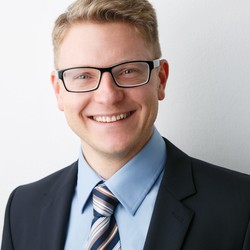